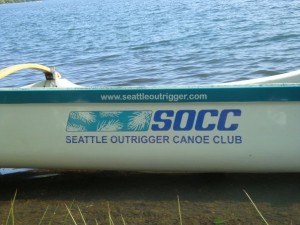 In May we participated in two Sprint race series and lot of our novice paddlers showed up and had a blast.
Race day at Spanaway Lake was sunny and everybody enjoyed a great day of racing on the water, the novices getting their first sprint race experiences under their belts. 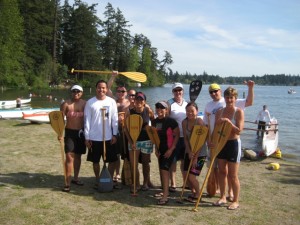 SOCC paddlers at the first Sprint Races of 2009, Spanaway
Sprints were held at Green Lake in Seattle on Memorial Day Weekend where we were blessed with another sunny day, but it was also windy which made for an even more interesting race day.
SOCC showed up in force and entered almost all the adult divisions. The grand finale was the 1500 meter Open Women’s race with 5 turns (at 250 meter) and the SOCC women managed to leave the competition behind for a very convincing victory in a good time. 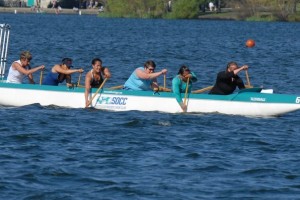 A few more pictures from our 2009 Sprint Races 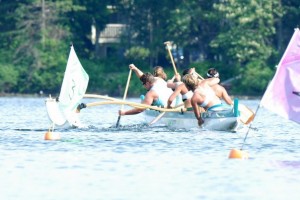 The art of turning 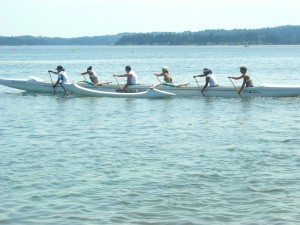 Heading out for the 500m open women race at the champs 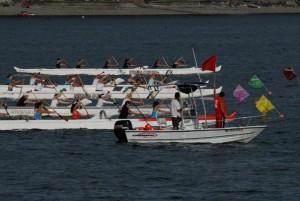 Rooster Rock Race June 27 in Oregon
This is a great new race on the PNW Race Schedule, hosted by Mountain Home Canoe Club in Portland.
We had two crews participating, a women’s and a mixed crew. Both did very well in the competition, with a 4th in the open women and 2nd in the mixed division.
The 10 mile iron race was very exciting with lots of different conditions; upriver with the wind but against the current, then downriver into the wind after turning at Rock Island, fighting the wind and waves, finding the fastest current. There was a fight to the green turn buoy, then the final 2 miles upriver again with the competition in your wake and breathing down your neck. The crews worked very hard and the results are well earned.

Staying ahead of the competition with 2 miles to go

The first long distance race of 2009, The Rusty Iron in Portland 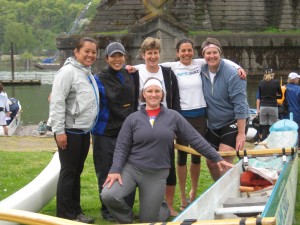 we just had our first long distance race of the season 2009, the Rusty Iron, and SOCC’s open women’s crew consisting of Kristi, Leslie, Beth, Melissa, Sabine and Mary Ann finished in 3rd place.

It was an exciting race with great turns and strategic course selection, which gave us the advantage of beating the competion who was ahead at the first turn. Our steersperson Mary Ann did a fabulous job steering her first race and we all had a great finish. Congrats to a great team accomplishment. 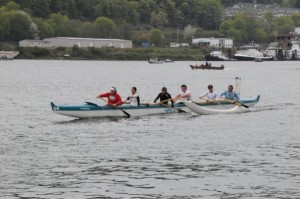 racing by the spectators