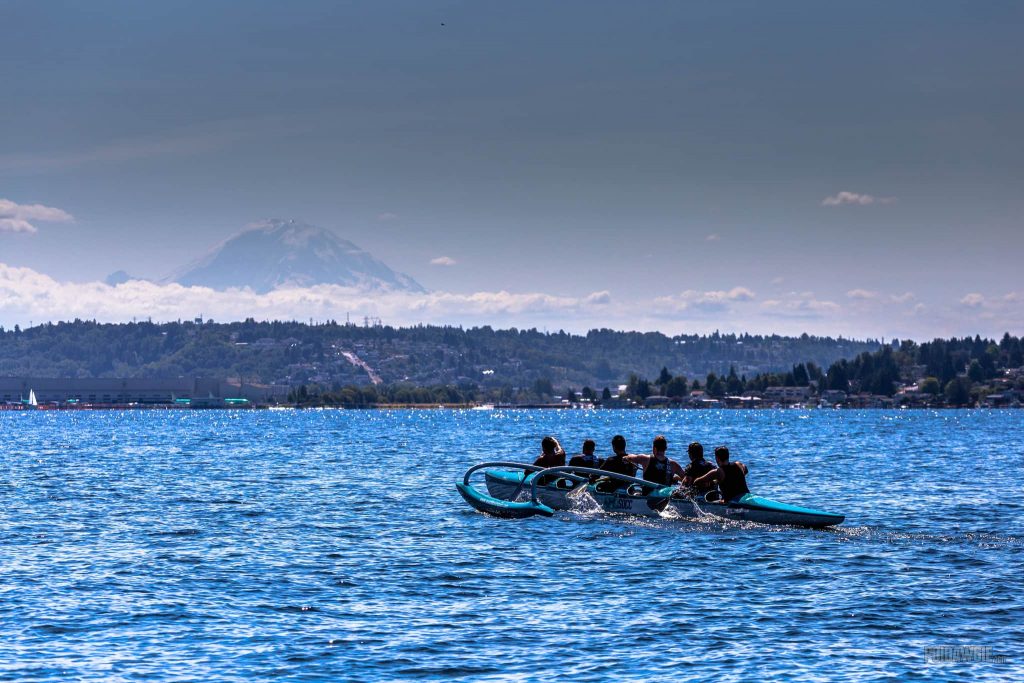 Six people raise their paddles together, reaching their bottom arms forward with their top arm straight and strong. On the steersperson’s call, six paddles break the ocean’s surface, burying their blades deep into the water and springing the canoe into motion. Stroke after stroke, they settle into a waltz rhythm and pull their boat across the sea. Whether paddling leisurely into the sunset or hammering down the final stretch of a race, six paddlers move as one unit to propel the canoe forward. From smoothly sailing across Lake Union’s calm waters to reaching for the ocean as the canoe climbs over towering waves in the Kaiwi Channel, this is outrigger canoe paddling.

With ancient origins and thousands of paddlers around the world today, outrigger canoe paddling is a sport with deep history and strong culture. Whether you are a seasoned paddler or would like to get in an outrigger canoe for the first time, here is an introduction to this sport and a few reasons we are passionate about it.

The first records of canoes with outriggers or “ama” have been found in Southeast Asia. These canoes were a means of transportation for early citizens of Austronesian countries including the Philippines, Indonesia, Malaysia, Australia, Melanesia, Micronesia, and Polynesia. From fishing and transportation to long journeys across the Pacific in search of new land, outrigger canoes were a means of livelihood for these communities.

Long before Captain Cook landed on Hawaii’s shores, ancient Polynesians were traversing the Pacific Ocean in voyaging canoes not so different than the ones we paddle today. Experts estimate these types of boats in Hawaii dating back to 200 A.D. These large voyaging canoes were built to hold dozens of people and strong enough to withstand the currents of the open ocean. With nothing but the waves, winds, and stars to direct them, expert navigators used canoes to explore the Pacific.

Over time, long-distance voyaging started to decline in Polynesia. Instead, the ancient Hawaiians crafted smaller canoes for fishing, coastal, and inter-island travel. These types of canoes used for these shorter journeys are the predecessors of the outrigger canoes we see today.

At the onset of the 19th century, missionaries took up residence in Hawaii and European influence swept through the islands. Like surfing, hula, and speaking Hawaiian language, outrigger canoe paddling was a piece of Hawaiian culture that dwindled when European settlers came to Hawaii.

Though missionaries placed taboos on many aspects of Hawaiian culture, the native people were able to keep their traditions going- even through American colonization of the island chain. In the mid-1900s, Hawaiian culture went through a renaissance, bringing ancient canoe navigation techniques, a celebration of hula through the Merrie Monarch Festival, and other aspects of the culture into modern times.

Though no longer a primary means of transportation, outrigger canoe paddling is still a popular sport and strong tradition today. Paddling remains a cornerstone of Polynesian culture with dozens of canoe clubs in Hawaii, Australia, Tahiti, Samoa, New Zealand and beyond. Outrigger canoe paddling is not only popular in Polynesia, but is practiced around the world; with canoe clubs across the U.S. mainland, in Japan, Dubai, and elsewhere, this sport shares Hawaiian and Polynesian culture on a global scale.

Because outrigger canoe paddling is a sport with a deep culture and rich tradition, there are a few things to know before getting started. If you are unfamiliar with the sport, here is a quick breakdown of the basics.

Anatomy of a Wa’a: The Outrigger Canoe

Called “wa’a” (pronounced Va-a) in the Hawaiian language, outrigger canoes get their English name from their outrigger or “ama” as they are called in most Polynesian cultures. The body of the canoe is long and narrow, with a rounded point at the front and back of the canoe. Outrigger canoes can be for one, two, three, four, or six people, respectively called OC1, OC2 and so on for however many seats the canoe has. Many canoe clubs use Hawaiian words to describe various parts of the canoe. A few terms to know include:

Like a soccer team has forwards and a goalie, each paddler has their own role in the canoe. While many outrigger canoe clubs teach their paddlers to sit in any seat, many paddlers will favor one seat in the canoe. A brief overview of each paddler’s role includes:

Pacific Northwest Outrigger Racing Association (PNWORCA) is the organization that brings together canoe clubs in our region. Dedicated to perpetuating outrigger canoe racing in Washington, Oregon, and British Columbia, PNWORCA brings paddlers from this area together to build community and share Hawaiian culture through canoe paddling and racing.

Established in 1996, SOCC is one of nine PNWORCA clubs in Washington. Whether you are an experienced paddler or new to the sport, our club welcomes you to join our crew or do a trial membership at any point during the season. SOCC is made up of men and women of all ages who participate in recreational and competitive paddling. We paddle year-round and compete in sprint and long-distance races throughout the Pacific Northwest during the spring and summer. To learn more about our keiki (child) or adult programs, our canoes, or to join a practice, contact us today. We hope to see you on the water!