The Na Pali coast is calling us
Aloha all paddlers,

Spring is here, and we are again practicing three times per week.

Our racing season starts in April, and if you took it easy this winter, that doesn’t leave you much time to get back in paddling shape.

Last year the big race for the club was the Catalina Crossing. We had a mixed crew of 3 men and six women, and we had a blast. We finished with a fabulous 5th place, and everybody had a fantastic time.

For the 2010 racing season, we will focus on the local races in the greater Pacific Northwest Region. Exciting races are in Gibsons in BC, a beautiful but long and hard course of 14 miles; then a week later the GorgeÂ Race in Stevenson, Washington in mid-July.

Our race, DaGrind will be at Magnuson Park on August 7 this year, and we will work hard to make it yet another great race in this region.Â  (We will be back at Alki Beach in 2011!)

Also in August, some of us will be in Hawaii. We have enough paddlers committed to racing in the Na Pali Challenge on Kauai. This 38-mile race involves a crew of 12 (6 women, six men) and takes place on August 14. That is just a week after DaGrind, so for those six men and six women, the earlier races will lead up toÂ this great race.

And at the end of August is the Lake Washington Changeout race, a long and fun race that we hope will be attended by all of our paddlers. It’s a great experience, and everyone will have a chance to show what they are made of and how they’ve grown as paddlers over the season.

In September the season is ending for the local races, and we hope to still have lots of interest from everybody to attend that races. I am hoping you all are excited about the new season.

one of the SOCC women’s crews at DaGrind 2009 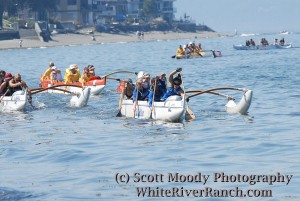 The first lap is done at DaGrind 2009